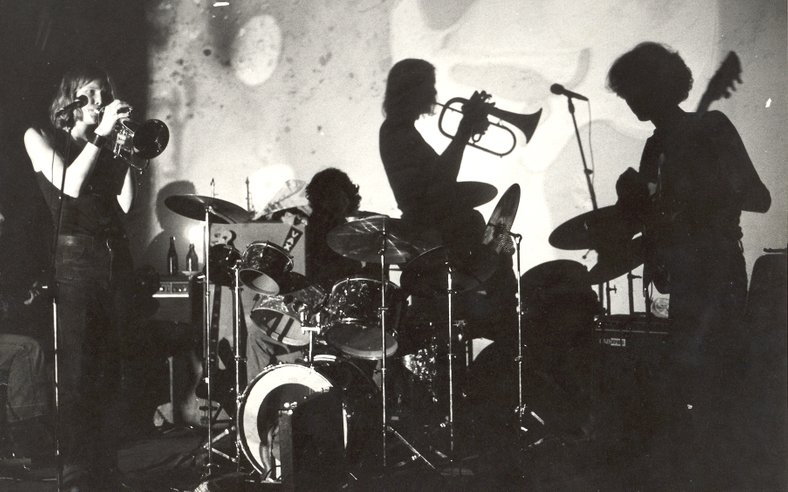 Studies painting and drawing. Plays diatonic and chromatic harmonic in a variety of constellations.

Intensifies his study of the guitar.

Obtains high school diploma from Frederiksborg Statsskole with a major in Math and Physics.

Full-time guitarist. Plays in several bands with genres such as latin, rock, fusion and free-jazz.

Becomes a member of the Danish rock group Aske Jacoby Band and plays with a number of known musicians including Lars Danielsen, Jeppe Reipurt and Debbie Cameron.

Contributes on a record with Aske Jacoby Band (later known as News).

Leaves News. Intensifies his study of jazz guitar, studies harmony, inversions, scales etc. Contributes as musician and co-arranger to music by Joachim Holbek written for several contemporary ballets that were performed in The Royal Danish Theatre and Glyptoteket.

Performs extensively in and around Copenhagen both trio and duo. Composes with an emphasis on jazz.

Contributes as instrumentalist and arranger on Tony Vejslev’s record “Til dines øjnes Aandemusik”. Performs mostly own compositions at concerts.

Displays art exhibition with more than 100 of his own paintings. Four month stay in England where he holds several concerts and composes 15 new jazz compositions. Hold duo concerts with Nils Raae (piano) and Ole Rasmussen (bass) upon returning to Denmark.

Moves to Namsos in Norway. Gives lesson in guitar and ensemble playing at the local music school and the local high school. Writes a contract with Warner/Chappell. Composes jazz music as well as a flute quartet in 8 movements. Performs a number of duo concerts. Contributes in the punk group Nullskattesnylterne.

Composes trio for mezzo-soprano, violin and vibraphone along with 12 jazz compositions. Continues to teach now also art. Paints over two hundred paintings using oil and watercolour paint. 35 are showed at an exhibition.

Greece where he writes six new jazz compositions. Composes ”En bryllups vals” for flute and guitar. Composes ”Jubilæumsstykke” for ten instrumentsand a jazz/fusion-piece ”Dance”. The two compositions are ordered by the Namsos Music schools for its ten year anniversary. The book ”40 Pieces of Jazz by Jakob Vejslev" is published by Warner/Chappell.

Finishes opus 84 and composes “Solo piece for bas clarinet opus 97”. Holds concert at Namsos kulturhus, where the above-mentioned pieces and others are performed. Moves to Trondheim. Writes eight jazz/latin compositions as well as the solo pieces for bas clarinet opus 105 - 107. Receives work grant from DJBFA.

Composes "Trio no. 3, opus 109" for flute, clarinet and piano. Writes 14 Jazz/Latin compositions along with hymn with lyrics by Ole Sarvig. Works with "Trio 4 opus 110" for bass singer, trumpet and organ, with text by Walter de la Mare. Records a CD in Norway with four solo pieces for bass clarinet along with “Trio nr.3”. Composes "Duo for bass clarinet and piano opus 121". Moves back to Denmark. Receives a work grant from DJBFA. Composes ten jazz compositions. Writes piece for song and accompaniment opus 129, "Night" (Poem by Anne Bronte). In addition to this he writes "Piece for organ, opus 132".

and two duets for trumpet and organ on Warner/Chappell. Records the CD "New Music for Organ, Trumpet and Bass Voice" with the support of DMFF. Creates pop/techno demo with own compositions and own lyrics (with the exception of one tune with lyrics by Thomas Carlyle). Receives grant from DJBFA.

Heinesen. Writes two pieces for organ opus 208, 209, that are performed in

Nidaros Cathedral in Trondheim (Norway). Composes music for poems by Ditlevsen opus 210 for mezzo-soprano and cello and opus 203 and 211. Receives grant from DJBFA.

Composes choral and chamber music to poems by Ditlevsen, Emil Aarestrup, Viggo Stuckenberg, and some jazz compositions. Receives travel grant and composer stay in Spain, where he organizes opus 211 for choir and writes opus 222. Receives working grant and extraordinary grant from DJBFA. The Elias Church’s chamber choir performs two of his choral pieces opus 211 and 219 on Spil Dansk Dagen after a close collaboration with them.

The album "Throughout" is published with the support of DJBFA. Arranges and completes compositions to the album "Choir and Chamber Music" published later in December with the support of KODA (Composers rights in Denmark). Composes "Solo Sonata for trumpet in four movements opus 223" commissioned by Søren Emtoft.

Records new organ pieces that are to be a part of an earlier collection of recorded compositions for trumpet and organ (see 1999).  Prepares to record  ”Solosonate for Trompet opus 223” with Søren Emtoft which is to be used for the same project.

Arranges 12 movements for mixed choir to the melodies of his father Tony Vejslev.

The movements are published in a booklet along with a CD under the title "Håndslag til Tony" by the publisher Olafssongs (january 2007).

Completes series of seven psalms to the Norwegian Church's proposal for the upcoming new hymnal. Hymn no. 245, opus 305, with text by Inge Bjorg Kasin Sandsdalen premieres in Ilen Church in Trondheim on the 4th of June and is performed by Nina Sæterhaug (soprano) and David Scott Hamnes (organ). Composes opus 304 to Danish hymn no. 89 with text by John Johansen and opus 306 with text by Hulda Lütken. Works with jazz compositions. Composes wedding piece for organ, opus 308 dedicated to David Scott Hamnes and Marit Aubert Anmarkrud. The piece is played in Nidarosdomen (Trondheim) by Thomas Grubb. Composes "Piece for Trumpet and Organ in three movements, Op 310".

The music is played by Thomas Præstegaard (tenor) and Nils Raae (piano).

Writes "Largo ", opus 375 for solo jazz guitar/ensemble and arranges the piece for organ. Reviewing and preparing over a hundred of his compositions for danish poems in order to prepare them for publication. On June 21st "Largo", opus 375 is performed (for the first time) by organist David Scott Hamnes in Nidarosdomen on the big Steinmeyer organ. Composes jazz ballad "Just a Tad Sentimental", opus 376. Receives grant from DJBFA. Composes opus 306 B and 306 C for Hulda Lütkens poem "Fjernt i det luende Foraar" and to Johannes Jørgensen's poems: "Allesjælesnat", opus 377, "Sommeraften", opus 378, "Gensyn", opus 379, "Her staar de grønne Stammer", opus 380 A, opus 380 B,

Reviews and edits fifty of his tunes for English poems composed in the period 2007 - 2009. Puts music to Viggo Stuckenberg poems:"Skoven", opus 383, "Mismod", opus 384, "Augustaften", opus 385 and “Stjerner”, opus 387. Composes opus 386, “Sommeren” with text by Ole Sarvig. Signs a contract with the publisher Olafssongs regarding the release of the sheet music booklet "117 DANISH SONGS". Proofreads sheet music and lyrics for the booklet.

Prepares to record a demo with 12 songs from "117 DANISH SONGS". The songs are recorded by four students (including a soundengineer) from the Royal Danish Academy of Music under the leadership of Professor Helene Gjerris . Creates a concert at Ilen Church in Trondheim October 1. The program consists of new organ compositions and hymns for texts by Norwegian poets and some jazz compositions. The concert is performed by organist David Scott Hamnes, mezzosoprano Nina Sætherhaugh, saxophonist Christian Cuedra and J. V. Concert, supported by the municipality of Trondheim. Composes music to the poems by Ludvig Bødtcher, Emil Aarestrup, Thøger Larsen, Viggo Stuckenberg, Johannes Jørgensen, Ludvig Holstein, Kai Friis Møller, Tom Kristensen and Tove Ditlevsen: opus 389 - 410 and opus 413 - 416 A, 416 B, 417 - 420 A, 420 B. "Solo for Bass Clarinet No. 2, Opus 105" is recorded by Finnish Clarinettist Teppo Salakka on the cd "Fragmented Visions". Composes jazz music. Composes for organ "Palmstraat Præludium", opus 421.

Demo recording of 12 songs from "117 Danish Songs" is completed. The personnel is the following: Anne-Kristine Skov Vognsen: soprano, Freja Højland Høj: soprano, David Kragh Danving: baritone and piano, Nicholas Karlberg: sound engineer. The project is supported by DMFF. Composes "Jazz Waltz" and "Etude for Guitar", opus 423. Composes 10 jazz arrangements from a selection of own melodies composed in 2017. The poems are for the most part by Tove Ditlevsen. Composes the 12-tone piece "Præludium for organ, opus 424", and "præludium, Largo, Pesante" opus 321. 10 songs with texts by Johannes Jørgensen are performed for the first time at the annual summer meeting by Johannes Jørgensen Company on the 12th of August. The songs are from "117 Danish Songs", and are performed by the baritone David Kragh Danving with piano

by Michael Bønsdorf. Composes music to poems by Viggo Stuckenberg, Thøger Larsen and Emil Aarestrup: opus 425 A, 425 B - opus 433.